Every once in a while, imagine starting over

Here’s a suggestion for when you’re working on a long, complicated project. Every once in a while, work through the thought experiment of starting your project over. Re-examine every aspect on a fundamental level, relating the complicated abstractions and mental shortcuts to your basic guiding principles. Given everything you learned in the course of the project so far, would you do it the same way again if you started from the very beginning?

This thought experiment could have many different outcomes. When you started the project, you guessed at the right direction, but the benefit of hindsight may suggest a better way. Parts of the project may be kept around only because of the sunk cost fallacy. Maybe you’ve learned more about what the requirements really are. Maybe it’s time to kill this project and start a new one. Maybe the project is too long or too complicated and should be broken down into several smaller projects. Maybe your plans for the rest of the project need to change. Or maybe you can have more complete confidence in your current approach. Most likely you will find at least a few small things to tweak.

Let me give you a hypothetical example. Suppose that you have a software system with two threads: one that produces data objects and one that consumes them. You do extensive performance profiling and find that both threads run too slowly, so you spend some time speeding up both threads. Eventually, you speed up the consumer thread until it only takes 12 CPU instructions per incoming data object. If you were under time pressure to deliver a critical patch, then you’d be happy with your optimizations and you would ship what you had. But if you thought through what you would do if you were to start over, then you would probably decide that using a consumer-producer multithreading architecture is the wrong strategy entirely because a single thread is good enough.

Around the start of 2013, when I was working on my PhD, I was wandering in circles around a particular problem: I wanted to discover the conditions required for a pair of Q-learning agents to learn to take turns in a simulated context. I parameterized the agents’ reward functions and tried to discover a pattern that would compactly describe how to incentivize turn taking. I went down a few blind alleys: genetic algorithms, linear decompositions and staring blankly at a simple visualization of the problem. Eventually, I realized that game theory is the correct approach for analyzing this kind of multi-agent scenario. At that point, I revised the entire plan for my PhD so that the next part was focused almost entirely on game theory.

Most of your time must go to detail work, so when is it time to step back and look at the big picture? Unfortunately, you probably won’t reach an epiphany moment where you know its time to rethink the project, like I did with my PhD. No tree will scream “this is the wrong part of the forest.” At the start of this essay, I suggested that you imagine starting over "every once in a while,” but a definite schedule may be helpful. How about 1 January each year? Or the first day of each month? What projects are you working on now? Do you have one where you’ve focused exclusively on details for a long time? Maybe now is the time to imagine starting that project over

Posted by Peter Raffensperger at 3:53 PM No comments:

The Jefferson Bible is a redaction of the King James Bible, taking verses exclusively from the four gospels: Matthew, Mark, Luke and John. These books are in the public domain and you can download them from Wikisource:
When I transmit a message, I can compress that message more if the recipient of my message already shares some information with me. For example, if I know that my grandpa has a copy of WinZip, then I could sent him a file that uses the zip compression format, which uses fewer bits. Frequently, when we encode something, we just assume that the other end knows the format because we chose ubiquitous file formats: we have pre-shared knowledge of the encoding. I will estimate an upper bound on how much information Jefferson contributed to the world based on the information required to encode the Jefferson Bible, given the King James Bible as pre-shared knowledge. Copies of the King James Bible are much more common than copies of the Jefferson Bible, which half-justifies this approach.

Matthew, Mark, Luke and John comprise 3778 verses in the King James Bible. For each verse that Jefferson copied in whole, I will consider that he has added a full 12 bits of information: enough to choose a verse in the canonical gospels. The Jefferson Bible includes some verses only in part; I will encode those verses as straight ASCII, at 7 bits per character. The Jefferson Bible has 1028 verses: 450 from Matthew, 94 from Mark, 338 from Luke and 146 from John. Actually, some verses in the Bible are exact copies of other verses, so alternative counts are possible.1 Thirty-eight verses are partial matches. With this encoding the Jefferson Bible requires 29520 bits or 3.6 kilobytes. If we encode all 116037 characters with ASCII, then we require 812259 bits or 99 kilobytes. My scheme achieves a 3.6% compression ratio. All this is to say: Thomas Jefferson did not add much information to the corpus of human knowledge in his humanistic redaction! 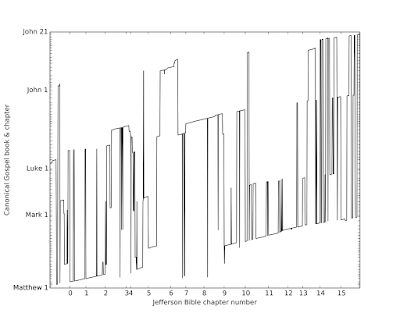 Wikipedia tells us that "Jefferson's condensed composition is especially notable for its exclusion of all miracles by Jesus and most mentions of the supernatural, including sections of the four gospels that contain the Resurrection and most other miracles, and passages that portray Jesus as divine.” In an attempt to quantify Jefferson’s tendencies, I computed the relative frequencies of each word that appears, both in the canonical gospels and in the Jefferson Bible. Some words are much more likely to occur in the Jefferson Bible, than in the canonical gospels, while others are much less likely in the Jefferson Bible. Below is a table listing 140 words:

1. Because the gospels have redundancy, we can compress them, too. Matthew and Luke seem to draw heavily from Mark, as well as from a hypothesized source, Q. I’m curious as to the entropy of the gospels themselves, which would be a useful point of reference here.

Read more »
Posted by Peter Raffensperger at 2:42 PM No comments: